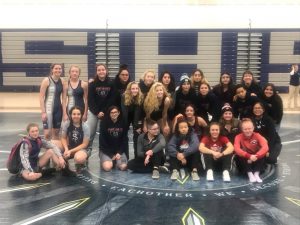 Four members of the Severance High School girls wrestling team had a busy weekend as they hosted two schools in a triangular competition on Friday, 12.20, then competed with 160 other female wrestlers in the 2019 Northern Colorado Christmas Tournameny at UNC.  Charisma Nation, Addi Cronk, Halle White and Sofie Badger are all about 5 weeks in to their first wrestling seasons and all are learning and improving every time they step on the mat.  On Friday, the team hosted the girls teams fron Northridge and Eaglecrest, where 20 matches in all were wrestled.  On Saturday, the NCCT tournament showcased the very best female wrestlers in the state.  In a full 16-wrestler bracket, Charisma was able to reach the semifinals and ended up placing 4th.

No Events This Week

Events are added by athletic staff.
View All Events