This inaugural season has been full of up and downs, but currently the Silver Knights are trending in the right direction. After an 8-1 victory on Friday night, Severance was able to grind out a 1-0 win against Fort Morgan on a gorgeous Saturday morning at Severance High School. This win was the Silver Knight’s first home victory of the season. In the 7 games prior to Saturday’s contest, SHS has given up 20 goals. With defense being the focus over the past two week, Coach Scharf and Coach Matt were thrilled with the “ugly” 1-0 result. Offense has carried the load for the Knights so far this year (29 goals in 7 games prior to Saturday) and as Coach Scharf said after the game, “Offense will not always be there. We will have off days sometimes where the offensive flow is broken up. This is when defense has to step up. Good teams win ugly and we did that today.”

In the 15th minute, Jovanny Gonzales scored the game’s lone goal off of a well-worked corner where Jahaziel Gonzales’ cross found Tyler DiPietro in a dangerous area. Tyler was able to trap the ball, commit the defense, and wisely tee-up Jovanny at the top of the box. Jovanny finished backpost with a classy, one-time shot that was low and out of the keeper’s outstretched arms. In the 23rd minute, after a bit of hustle, Kilian Schultz came close to doubling the lead for the Silver Knights as his sneaky shot found the near post with the keeper surely beaten. The rest of the half was relatively sloppy and neither of the teams could find much of an offensive rhythm as defense was stingy. Kyler Lutz had his best game to date in the center of the park. Kyler was consistently able to disrupt play and frustrated Fort Morgan for the entire match.

The second half was much of the same with both teams coming close on numerous occasions. Philip Vigil was on his game in this one. Phil has been trading time with Aidan Campbell in goal. While both have room to improve, the progress and growth in both of them is evident. Phil played the entirety of the game in net and SHS was sure glad that he did. Phil recorded his first shutout of his young career thanks to a number of sure-handed saves and one excellent piece of goalkeeping that saw Phil dive to swat away a cross that was bound for a wide-open Fort Morgan player on the back post. Phil was so excellent that his teammates voted him the Man of the Match within seconds of the game’s end. Well done, Phil and, once again, 3 points to the Silver Knights!!! 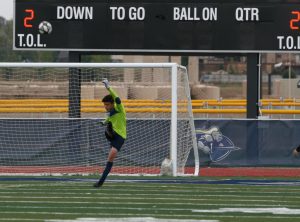